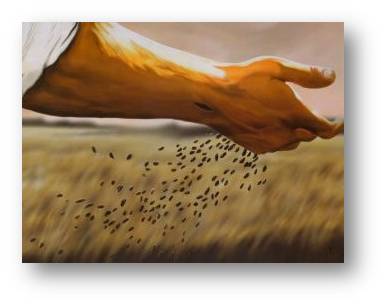 The first two parables that Matthew records in chapter 13 deal with agricultural themes – something that would have been clearly understood in Jesus’ day; not so much in 21st century America where the closest the majority of us get to fresh produce happens in our local grocery store or farmers market. We rarely get dirt under our nails or callouses on our hands from working the soil. Some of us would only have a green thumb if we stuck our thumb in green paint. That’s ok. I don’t have to be an artist to appreciate Picasso and I don’t have to be a farmer to understand the meaning of Jesus’ parables.

In the first one, He introduces us to a farmer indiscriminately scattering seed on four different types of soil which “represent different responses to God’s message” (Study Bible, p. 1569).  The seed is the word of God and the farmer is His messenger (all of us). Some of the seed falls on a footpath and is eaten by birds. Some seed falls on shallow ground and is quickly wilted by the hot sun. Some seed falls among thorns that choke the young plants. And some seed falls on good soil and produces a crop worth harvesting.

First of all, if I were a farmer I would care a little more about where I was scattering. I mean, why waste seed? But Jesus doesn’t see it like that. He wants us to openly share the good news of God’s word with everyone, even though most of the time it won’t produce worthwhile results. The truth is, people will respond differently to how we live our lives because their “soil” is in different states of readiness to hear what God has to say. “Some are hardened, others are shallow, others are contaminated by distracting worries” (Study Bible, p. 1569) and a few are receptive. Jesus says it doesn’t matter.  Scatter indiscriminately anyway and don’t be concerned with the results.

Notice also how the crop yield for the good soil varies. Jesus says it produces “a harvest of thirty, sixty, or even a hundred times as much as has been planted!” (v. 23). Again, Jesus is breaking the rules of agriculture.  That’s God multiplying the outcome considering what was invested. It just proves that you don’t have to hold back on your supply of seed. For one thing, with God it’s infinite, and for another a little bit on good soil produces an amazing return. It begs the question: what kind of soil am I? Exactly how has God’s word taken root in my life? If I am “good soil” what kind of yield have I produced?

The second parable focuses upon an enemy sowing weeds among a field of wheat the farmer has just planted. His farmhands want to pull up the weeds (nonbelievers) but risk also pulling up the wheat (believers). The reason is that before they mature, weeds and blades of wheat look an awful lot alike. Therefore, the weeds and wheat must remain side by side until the time of harvest. Jesus says this harvest is the end of the world (v.39), a time when His angels (harvesters) will separate the wheat (good) from the weeds (evil), which will be thrown away.   “There are true and false believers in churches today, but we should be cautious in our judgments because only Christ is qualified to make the final separation. If [we] start judging, [we] may damage some of the good “plants”. It’s more important to judge our own response to God than to analyze others’ responses” (Study Bible, p. 1570).

While I mostly agree with this sentiment (Jesus did say not to judge others 7:1), Jesus has also said twice (7:17 & 12:33) that you will be able to tell what kind of tree you’re looking at by the fruit it produces. There’s a bit of “discernment” required. And when there’s a group of bad trees leading the church, it seems like the correct and necessary thing to do to call it out. After all, non-believers only see a tree and if it’s producing bad fruit they tend to think most “trees” are bad. This view stains the effort of what Jesus is trying to accomplish through us; namely, bringing people into the Kingdom.

I also find it interesting that in his explanation of the parable, Jesus uses the phrase “fiery furnace” (v. 42) to describe where the weeds will be thrown. There is a story about a rich man in Luke 16 who has died and is in agony in the flames (v. 24). In the view of many scholars, they believe these references are to hell and the fact that hell will be a hot place. Maybe this is true. I’m certainly not as learned as some. But I did hear someone at some point in time suggest that hell will actually be an empty void of suffering without the presence of God. I tend to believe that view because it fits better with the portrait of a loving, benevolent God. Why would He sentence lost people to a fiery place when I believe He will simply respect the wishes of individuals who do not want to spend eternity with Him?

If there is a fiery place of torment, I believe Revelations indicates this will be the eternal resting place for Satan and his minions (20:10, 14-15; 21:8). One thing is certain: more study is required. Revelations is a confusing book and not our focus here.

In any event, Jesus concludes his explanations of the second parable with the words “Anyone with ears to hear should listen and understand!” (v. 43b). He’s opening the door to everyone in that sentence and not discriminating against anyone based on any of the qualifiers that people throw up to prevent others from entering the Kingdom. I like that. The question now is: do I do the same? Am I opening the doors for everyone? If I’m not, then I’m not imitating my Savior.